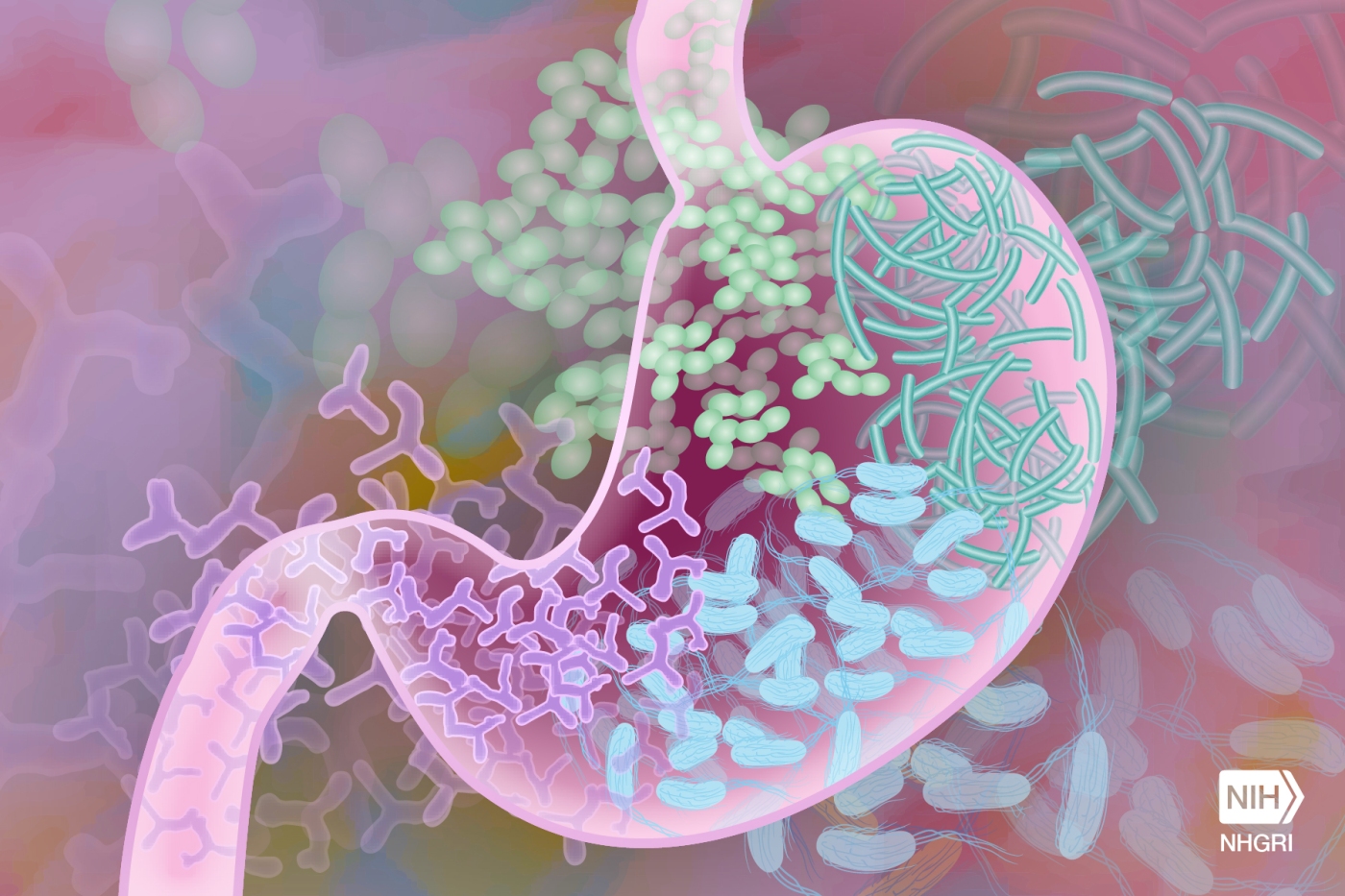 The word “bacteria” is often accompanied by a nose wrinkled in disgust and thoughts of infection and disease. Even though we have as many microbial cells as human cells within each of us—that’s right, we’re 50% bacteria—most people still find bacteria something to avoid. However, recent research into the gut microbiome, the ecosystem of commensal bacteria and other microbes that colonizes the human gut, suggests that the bacteria inside us may be a key factor in how patients respond to novel cancer treatments. In the January 2018 issue of Science, researchers from the University of Chicago to MD Anderson in Texas to Gustave Roussy Cancer Campus in France published articles detailing how the gut microbiome influences the progression of many cancer types, including colon cancer, lung cancer, and skin cancer. That microbes in the gut could influence cancer in the gut (particularly the colon) was unsurprising and has been studied for some time; however, the fact that microbes thriving in our digestive tract can influence cancer cells in far off locations, such as the skin, was a novel and groundbreaking discovery. Scientists first discovered the fact that bacteria could influence cancer growth by studying the disease progression of patients taking antibiotics compared to patients who were not, and found that patients on antibiotics often suffered from more aggressive disease progression. Wide spectrum antibiotics kill off many species of bacteria, not just the ones making us sick. What scientists found was that by killing off the bacteria that normally live within us and support our health, known as commensal bacteria, cancer cells in colon, lungs, kidney, and skin did not respond to novel immunotherapies such as checkpoint inhibitors, which exploit the immune system to fight cancer. This work implied that some bacteria in the gut can offer some kind of protective effect that helps the body suppress cancer growth or boost immune function, up to a point.

Checkpoint inhibitors are a new class of drugs that have offered remarkable results to certain patients. For example, President Jimmy Carter was given checkpoint inhibitors to treat his metastatic melanoma when it traveled to his brain in 2015. Within months, he was in remission, a rare and remarkable recovery. Checkpoint inhibitors act by blocking the ability of cancer cells to inactivate killer T cells, the body’s natural response to disease. With checkpoint inhibitors, many patient’s bodies can identify and kill tumor cells through natural immune activity, the way they fight infectious diseases. Immunotherapies are becoming an attractive and promising area of research, and the finding that the gut microbiome can impact their efficacy could be key to expanding their use in the clinic.

While scientists are still unsure of exactly how the gut microbiome is impacting a patient’s response to immunotherapies, the evidence is remarkable. Three scientific teams in three different locations noticed these trends and performed a deep analysis of the microbiome of cancer patients on checkpoint inhibitors. Each noticed that there was greater diversity in the gut microbiomes of patients that respond to checkpoint inhibitors—that is to say, patients with more species of bacteria in their gut were more likely to see positive outcomes from checkpoint inhibitor therapy, including entering remission. Greater microbial diversity has been linked with many health benefits, and now a robust anti-tumor immune response may be one of them. Each team of scientists identified groups of bacteria that were found in patients who responded to therapy versus those who did not—Akkermansia, Faecalibacterium, and Bifidobacteriaceae. Working with mouse models of cancer, scientists found that by supplying mice with bacteria associated with good patient outcomes, they could make mice respond to checkpoint inhibitors, even if they originally had microbiomes that were associated with non-responding human patients. This was done through fecal microbiota transplants (FMT), to colonize mice with a full microbiome that mirrors human patients, or through supplementing mice with single species or genera of bacteria, or a combination of the two. The findings were clear; the manipulation of the microbiome could shift how well mice with a variety of cancers responded to therapies, following trends these scientists saw in human patients. This was true in lung cancer, colon cancer, kidney cancer, and even skin cancer. The microbial communities in other regions of the body, such as the mouth, did not impact these cancers; it was only the gut that played a role. This was particularly puzzling as these drugs were not given orally; they should not interact with the digestive system. What, exactly, was causing changes in the gut to impact cancer cell growth in the skin? Scientists still aren’t sure, but one group found that immune cells were enriched in the gut of mice with that modeled human patients that responded to immunotherapy, potentially indicating immune activation.

While the interactions between the gut and the immune system in fighting cancer are currently unclear, and there is no single, magical bacteria associated with a better anti-cancer response, this new area of research could be groundbreaking for patients. Microbial manipulation through FMT is gaining popularity as a way to treat severe microbial infections, and could be expanded to patient care if these trends continue to be validated in cancer patients and FMT gains wider approval. In the meantime, the current research does support that a diverse microbiome results in a healthy gut and, potentially, better cancer outcomes. While your gut bacteria alone cannot cure you, a healthy, diverse diet high in fiber can give you a leg up.

Author’s note: This blog post is rather heavy on microbiology for a cancer research blog, but the author believes that science is growing ever more interdisciplinary, and that understanding cancer relies on understanding the systems within and around us.

5 thoughts on “From bacteria in your gut to cancer in your skin, everything is connected”