Surgical resection is an important part of nearly any treatment regimen for breast cancer. It is imperative that surgery achieves “clear margins,” meaning there is no cancerous tissue on the outer rim of the mass that was removed. Recall the saying, “close enough only counts in horseshoes and hand grenades.” If pieces of cancerous tissue are left behind, there is an increased chance of tumor recurrence and spread to other parts of the body. For breast cancer patients, recurrence remains an ongoing concern, with a frequency of 6-23% depending on other factors.

A team at the Perelman School of Medicine has investigated a new way to evaluate whether or not a breast cancer surgery has achieved clear margins by harnessing the potential use of near-infrared light technology. This imaging technology was developed about a decade ago and uses near-infrared light to excite dyes and produce fluorescence. Since that time, the challenge has been identifying appropriate dyes to use alongside the technology and investigating its ability to guide surgeries in real-time. This group tested indocyanine green (ICG), which is a large molecule that typically does not cross the blood vessels. However, the fast-growing vessels of tumors tend to be more permeable, thus allowing for large molecules to pass through. As a result, ICG dye accumulates preferentially in cancerous tissue. And under near-infrared light, tissue with sufficient amounts of ICG dye fluoresces.

The team used canine models to test the use of ICG dye as a guide for breast cancer surgery. They administered ICG to dogs with mammary tumors and then conducted a mastectomy the following day. Out of the 41 tumors that were removed, 28 were fluorescent and had non-fluorescent margins. They also examined the wound bed after resection. There was visible fluorescence in five cases, one of which was due to some remaining cancerous tissue. The other cases of visible fluorescence were false-positives attributed to dye accumulation at sites of inflammation. 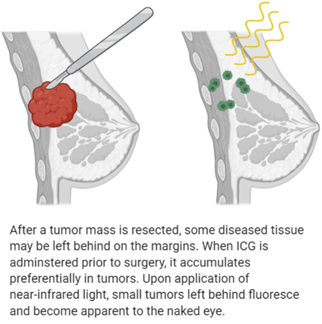 Another useful application of ICG in surgery could be a marker of which lymph nodes should be removed and which can be kept. Some types of cancer, especially breast cancer, commonly spread through the lymphatic system to the lymph nodes. Under normal conditions, the lymphatic system enables fluid exchange between tissue and blood vessels to maintain homeostasis, and this process is driven by the pressure difference between the two. Because the net pressure pushing fluids out of blood vessels is large, some fluid remains in the tissues. To return it to the bloodstream, fluid from the tissues is transported via lymphatic vessels. In breast cancer, drainage of fluid from cancerous tissue spreads cancerous cells to the lymph nodes, where they can take hold and form dangerous metastatic lesions. Consequently, lymph nodes surrounding the tumor are often removed during breast cancer surgery. In the aforementioned study, the group found 4 out of 7 lymph nodes fluoresced, and all of the four were determined to be cancerous.

In this application, you can think of ICG serving as your car mechanic’s code reader when your vehicle is not working. The code reader allows the mechanic to detect which part of your car is problematic and needs to be removed while leaving the associated working parts in place. If too many lymph nodes are removed, fluid can build up in the area of removal and another procedure will be required to drain the fluid. Current methods to identify lymph nodes for removal use a radioactive agent. A more favorable alternative is the use of a dye like ICG because it does not involve radiation exposure or necessitate the associated protective measures.

The use of ICG dye could become a new method to reveal tumor margins and lymph nodes to be removed during breast cancer surgery in a less time-consuming manner. Future studies will likely aim to optimize the use of this imaging agent to allow for the detection of smaller tumors and to reduce false-positive results. Surgeons know close enough does not count when it comes to breast cancer surgery, and in the future, they could have a new tool to help patients become cancer-free for life.

What are the Risks of Breast Cancer Returning?. Ww5.komen.org. https://ww5.komen.org/BreastCancer/SurvivalandRiskofHavingCancerReturnAfterTreatment.htm. Published 2020. Accessed July 12, 2020.

One thought on “Shining a Light on Breast Cancer (literally)”