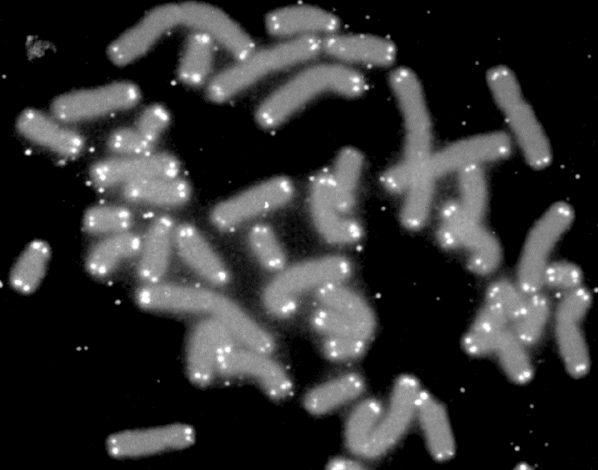 Mice are the principal model organisms in biomedical research. We rely on mice because of their close genetic and physiologic approximation to humans, as well as their relative ease of care and breeding. No model system is perfect, and many limitations are widely acknowledged in the research community. However, clever evolutionary thinking may have uncovered an artifact peculiar to laboratory mice — a genetic feature keeping their tissues young but extremely vulnerable to cancer — that could lead scientists to overestimate the risk of cancer in safety testing. And possibly underestimate another danger altogether.

From a biological perspective, few distinctions are more fundamental than that of general body cells (soma) versus reproductive cells (germ). Your germline has a certain form of immortality, because germ cells (which develop into sperm or egg cells) are the only cells that can give rise to subsequent generations.  This means that a line traced through your ancestry represents an unbroken chain of germ cell divisions reaching backwards into the past.

The germline stands in contrast to the rest of the 30 trillion or so cells that make up the body. These body cells are termed somatic, and unlike the immortal germline, your somatic cells eventually hit a dead end; they decline, fatigue, shrink and shrivel over time in a process known as senescence. One can think of senescence as something that happens on the cellular level, but eventually senescence across the body manifests as old age.

In 1957, George C. Williams advanced an evolutionary hypothesis to explain why senescence occurs in the first place. Expanding on earlier work by Peter Medawar, Williams suggested that evolution should favor any genes that are advantageous early in life at the expense of being disadvantageous later, for the simple reason that late-in-life disadvantages will occur past the point of reproduction. These good-early bad-late traits get passed on to subsequent generations before evolution can screen them out on the basis of their late-in-life penalties. On this account, aging (senescence) is merely a byproduct of those genes whose late-life costs go unweighted by natural selection. Williams named his hypothesis antagonistic pleiotropy, invoking the concept of single genes having multiple effects (pleiotropy). It wasn’t obvious, however, which genes might fit this description.

Nearly a half-century later, the evolutionary biologist Bret Weinstein envisioned a potential  mechanism of antagonistic pleiotropy having little to do with genes. Weinstein realized that senescence could be brought about through a sort of counter system keeping track of how many times a cell divided.

When a cell divides, chromosomes must duplicate in order for each daughter cell to retain a complete copy of the genetic code. This duplication process wears down the ends of our chromosomes. Fortunately, chromosome endings consist of repeat sequences of DNA known as telomeres that shield the rest of the chromosome from degradation. Often analogized to the aglets on shoelaces, telomeres protect the ends of chromosomes from fraying.

Although they are DNA sequences, telomeres do not encode any genetic instruction the way a gene does. However, they do shorten every time a cell divides, effectively placing a cap on the number of divisions a cell may undergo before it enters senescence and stops regenerating, a point called the Hayflick limit. Weinstein supposed that telomeres answered the long call for something to instantiate antagonistic pleiotropy. The telomere system was “good” insofar as it functioned as a fail-safe against tumors, but it was also “bad” because it placed a hard limit on regeneration.

Instead of a single gene or group of genes conferring good and bad effects at different times, Weinstein imagined telomere length as a sliding scale with a settling point that would reflect a balance of trade-offs: short telomeres would maximize their limiting function against runaway cell division that could become cancer, but would heavily restrict the capacity for cells to repair by that same division process. Conversely, long telomeres would maximize repair by permitting more cell divisions, but also increase the leeway for a rogue cell to over-divide and become cancerous.

When in 1984 the molecular biologist Carol Grieder co-discovered the telomerase enzyme— which extends telomeres under certain conditions—many became enchanted with the prospect of lengthening human telomeres to achieve longer lifespans. Others warned that tinkering with our telomeres (and, therefore, our Hayflick limits) was an invitation to tumor formation. After all, unbounded cell division is very nearly the definition of cancer.

Curiously, it had been known since 1990 that mice had absurdly long telomeres. This led Weinstein, along with his colleague at the University of Michigan, Deborah Ciszek, to recognize a seeming paradox: based on their impressive telomere lengths, senescence in mice should be long delayed, granting them long lifespans to match. They imagined that a large capacity to keep renewing at the cellular level ought to delay aging, all else being equal. Yet, mice are decidedly short-lived creatures.

Convinced that this incongruence between telomere length and lifespan could not be reconciled, Weinstein and Ciszek began to wonder whether mice really had long telomeres after all. Perhaps, they suggested, it was only laboratory mice that possessed ultra-long telomeres.

Sure enough, experiments performed in Greider’s lab suggested it was true: “wild-derived” mouse strains that had spent comparatively little time in captivity had short telomeres. What could have caused such a dramatic change in the DNA of our most relied upon model organisms in just a matter of decades?

Ask any research biologist in the United States where they resource their mice, and the answer is likely to be the same: the Jackson Laboratory, in Bar Harbor, Maine. The Jackson lab provides mouse strains for labs everywhere around the country. Weinstein and Ciszek speculated that the laboratory environment must have done something to lengthen mouse telomeres. Understanding the kind of evolutionary trade-off thinking that underlies antagonistic pleiotropy, they reasoned that breeding methods might be to blame.

If one wanted to produce the most mice for the least amount of mouse food, the most efficient protocol would be to breed mice only when they are young, discarding them as their reproductive output slowed. Shaped by economic considerations, this selection environment would place short-term vitality at a premium and discount any ability to resist cancer, since the mice would be killed before they would have the chance to develop cancer in the first place. Without any pressure to maintain the telomere safeguard against runaway cell growth, mouse telomeres apparently elongated, a response to an environment that “rewarded” vigor in youth above anything else.

How could long telomeres become so over-represented in the lab mouse population? Since the cells of longer telomere mice can keep on dividing, it is as if their bodies remain young at the cellular level. Consequently, they might reproduce slightly more efficiently relative to their shorter telomere cagemates. Their enhanced vitality would translate into more mouse pups bearing the same long telomere trait. Weinstein and Ciszek argued that long telomeres quickly propagated through the mouse colonies at the Jackson Lab as longer telomere mice out-reproduced those with more modest chromosome caps. Over enough generations, the entire stock may have been altered.

Consequences for cancer and beyond

According to Weinstein and Ciszek, captive breeding inadvertently upset the mouse telomere length balance so finely tuned by nature. Enforcing an early age of death by discardment quickly selected for rodents that were at once super regenerators yet hyper-vulnerable to tumors:

“By our model, selection for early high rates for reproduction in the absence of selection for longevity or tumor suppression should produce long telomeres and a strong propensity for eventual tumor incidence … at all ages, lab mice (with elongated telomeres) should be more likely to die of tumors than wild mice. These mice should also be unusually resilient to somatic damage and show few signs of aging other than tumor formation”

If lab mouse tissues possess an exaggerated capacity to divide, they might run a greater risk of forming tumors. All lab mouse strains with long histories of captivity could therefore mislead scientists into overestimating cancer incidence.

The standard test to see whether a substance causes cancer is to expose lab rodents to the compound at various doses and monitor them for health effects. The hazard for any potential carcinogen is assessed based on whether tumors are observed, what their type is, how many arise, and where in the body they occur.

It may seem non-problematic, even comforting, to know that our mice could be more sensitive cancer detectors than we might have thought. On the other hand, the possible ramifications could be pernicious in their own way. Overestimating how cancerous a substance really is, be it synthetic or naturally occurring, could foreclose on the use of potential new therapeutics offering advantages over current treatments. Candidate pharmaceuticals are tested on mice to see if they cause abnormal growths, but with compromised telomeres, it might be difficult to get an accurate assessment of cancer risks.

Researchers have likewise relied on rodents to estimate the risk of causing cancer posed by radiation therapies. Radiation can be a cancer treatment, but it can also cause cancer via collateral damage to the DNA of healthy cells. Any predisposition for damaged mouse cells to form tumors could complicate their use for estimating cancer risks in humans, potentially misinforming treatment strategies.

At the same time, we may be underestimating drug toxicities. Testing a drug or other chemical compound for systemic toxic effects on mouse tissues could be problematic if they dramatically exceed our own tissues’ ability to repair. As a result of enhanced cell renewal, a mouse with long telomeres could have a radical capacity to heal, thus masking toxic effects that humans would suffer.

The end of the line

Weinstein and Ciszek’s astounding prediction notwithstanding, the relationship between telomere length and lifespan may be more complicated than originally thought. To some measure of surprise, Greider noted that her wild-derived mice, all of whose telomeres came up short, still had lifespans just as long as the long-telomere strains. Indeed, even Weinstein and Ciszek came to expect that longer telomere mice should in fact have a reduced maximum life expectancy were they allowed to live, if only because long telomere mice would be more likely to have their lives cut short by cancers.

To be sure, nuance abounds. Many factors determine lifespan, and many more influence the odds of forming a tumor, most having nothing to do with telomeres directly, or with the telomerase enzyme that extends them. Nonetheless, the impact of ultralong telomeres may yet prove to be an underappreciated confounder in the effort to model our own biology in the body of a mouse. It may be worthwhile for researchers investigating aging and cancer to consider telomere length variability in their mice. There may even be a unique opportunity in the case of long telomeres to avoid or even rectify the issue, should breeding practices be implicated.

Note: Jackson Laboratory has recently pushed back on these claims, and you can find their comments here. As far as we can see, no data has been presented to support the claims made in their post, so we invite readers to critically evaluate their claims, which should be done for any scientific publications, including our own.