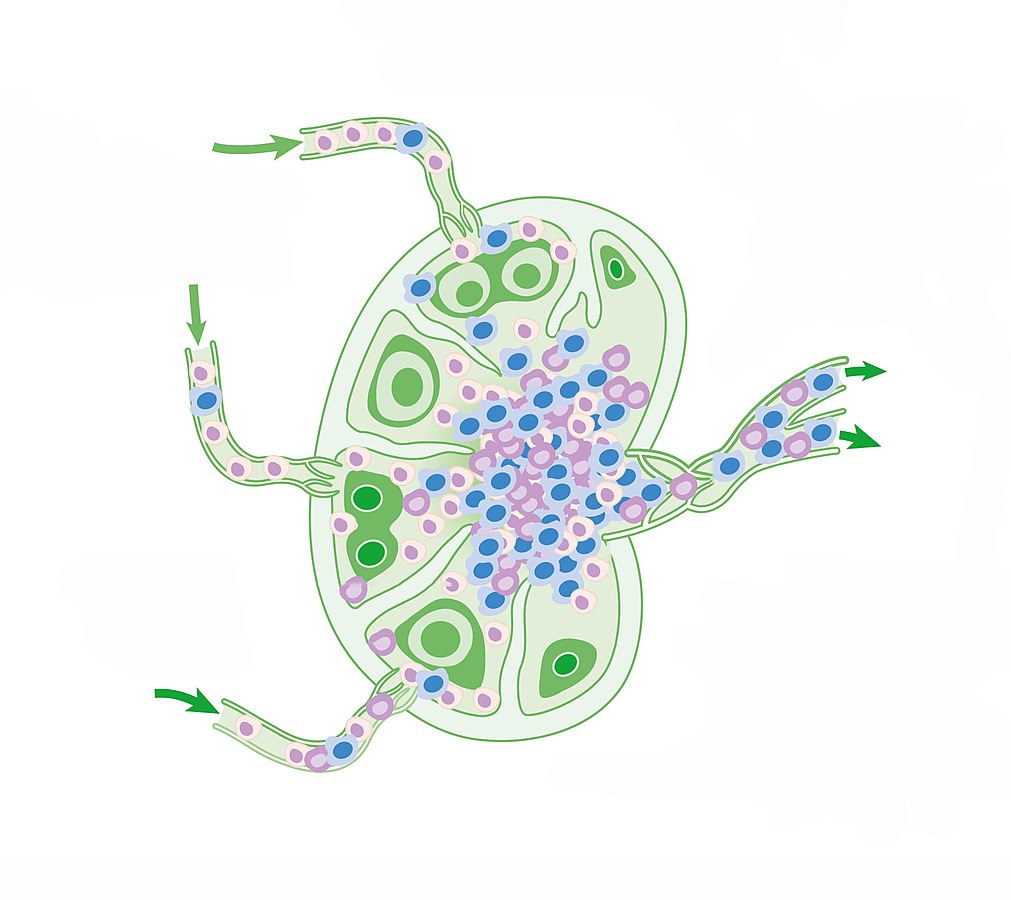 Perhaps the only time most people consider their lymph nodes is at a doctor’s office. Often, when examining you, a physician will touch the sides of your neck, feeling for enlarged lymph nodes. In this case, swollen nodes indicate that your body is mounting an immune response. This immune response is the body’s way of mobilizing an attack against an infection, whether bacterial or viral, and swelling indicates the gathering of immune cells for this purpose. However, in the context of cancer, lymph nodes play a more sinister role.

If you or a loved one has ever had cancer, you have already had to consider lymph nodes and their importance in the spread of cancer. The lymphatic system is a drainage system and conduit for the immune system that extends throughout the body.  A primary concern with most cancers is metastasis. Metastasis refers to cancer cells breaking off from the original site or tumor and moving to other places in the body, including the liver, lungs, and brain. Tumors that grow in these secondary sites are called metastases. The presence of metastases means a more serious diagnosis. In fact, the vast majority of cancer-related deaths are attributed to metastases and not the growth of the original tumor.

Upon detection of cancer, the next step is determining how far the cancer has spread. This is in most cases done by removing or biopsying the nearest lymph node, also called the sentinel lymph node, and observing whether there are cancer cells present.  The presence of cancer cells in lymph nodes is a determining factor in the stage, or severity, of cancer. However, there is no consensus in the medical community as to what extent further lymph nodes should be removed. Evidence from clinical trials is mixed. In breast cancer, for example, some studies report that removing more than the sentinel lymph node had no effect on breast cancer patient survival, suggesting that only the sentinel node is clinically important. But others have found that treating regional lymph nodes with radiation early on has a positive impact, implying that nodes beyond the sentinel node do play a role in the spread of disease.

On a more basic level, scientists and clinicians debate whether cancer cells that make it to the lymph node can leave and form metastases in different organs. To better understand how cancer cells can (or cannot) spread from lymph nodes to distant sites, two groups of researchers used mouse cancer models. Their results were published in the March 23rd issue of Science magazine.

In the first study, a group of researchers based out of Austria began by precisely injecting breast cancer cells into a lymph node and observing what happened. They found that the tumor cells quickly grew and crawled toward the small blood vessels within the node itself. After just three days, the researchers could detect cancer cells in the blood and after eleven days they found that cancer cells had spread to the lungs. These results demonstrated that yes, cancer could metastasize from the lymph node to other places in the body.

The researchers then tested to see whether the cancer cells got to the lungs directly from the first lymph node, or if they took a more indirect route through other downstream nodes. To do this, they tied off the vessel carrying lymph fluid from the first node to the second, effectively limiting the path the cancer could take so that it could only travel out of the node via the bloodstream. Still, the cancer cells spread to the lungs. They also observed that in human breast cancer patients, cancerous cells were present in the blood vessels surrounding sentinel nodes. Based upon their evidence, it would seem that at least in mice, cancer cells can and do spread from lymph nodes by entering blood vessels within the node and traveling via the bloodstream to more distant sites in the body, such as the lungs.

In the second study, a group of researchers based out of Harvard used a different approach to answer the same question. Their method used a fluorescent protein found in coral called Dendra2  to visualize cancer cells as they moved to different places in the mice. This protein has an interesting and useful property in that it normally glows green, but turns red if hit with a blue laser. Knowing this, the researchers genetically engineered cancer cells to express this protein, and then injected the cells into the breast of the mouse. Once the tumor cells grew and metastasized, the team shined a blue laser on the nearest lymph node, turning cancer cells in that specific location red. From there, they looked for the red-colored cells (from the node) in various other places in the mice. They found these specific cells in the blood and in the lungs, indicating that the cells had left their original location and formed tumors elsewhere. Like the previous research group, they found that cancer cells crawl towards and into lymph node blood vessels. The conclusions from both groups are strikingly similar, both point to the lymph nodes as a conduit for cancer metastasis.

While these studies provide important insights, there are still questions left to address. For one, does cancer behave the same way in people? Also, what does this mean for treatment of cancer patients? On a personal level, I’ve had to ask many of these same questions. My own mother was diagnosed with breast cancer and recurrent melanoma; she is now a 7-year survivor. At the time of diagnosis the decision was made to remove all the lymph nodes in her right arm. This has left her with long-term consequences. She now suffers from lymphedema, swelling caused by fluid build-up due to the lack of nodes. And while she tells me it is not painful, she does have to wear a special sleeve and use a pump to help alleviate the swelling. As a side effect of the lymph node removal, she also needs to be especially wary of infection, as that arm does not have a fully operational immune system. Even with all these complications, she is simply glad to have survived. For all we know, removing the nodes may have been what saved her. Like millions of cancer patients and their families around the world, we may never truly know which care decisions ultimately made a difference in her outcome.

Advancements in cancer research, like the aforementioned studies, are key to understanding what cancer is doing in the body. The results from these experiments will undoubtedly lead to even more research in the area. My own research group at the University of North Carolina is studying this very subject: attempting to understand the importance of lymph nodes in cancer metastasis. In the end, I believe we all have the same goal—for more people to survive cancer. To do that, we need to understand how and where cancer moves so that we can stop it in its tracks.

2 thoughts on “In cancer, your own lymph nodes turn against you”