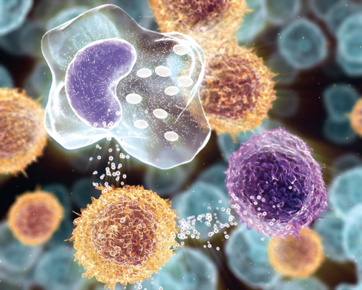 Many people are excited about checkpoint inhibitors in cancer immunotherapy. In fact, the 2018 Nobel Prize in medicine was awarded for the development of two checkpoint inhibitors PD-1/L1 (Opdivo/Keytruda) and CTLA-4 (Yervoy). However, cancer immunotherapy is not a new concept. In fact, in 1986, recombinant interferon (IFN) alpha was the first immunotherapy approved by the FDA for cancer treatment. Cytokines, such as IFN-𝛼, are small proteins used for cell to cell communication and are instrumental during an immune response. The type of cytokines present in an environment informs a new immune cell on how it should behave. Generally, there are two categories of cytokines, wound healing and proinflammatory. Wound healing cytokines are produced when there is an injury. These cytokines tell the immune cells to help repair the tissue and prohibit them from causing more damage. Some examples of this type of cytokine are IL-10 and IL-4. Proinflammatory cytokines are produced during infection.  They tell the immune cells to destroy the infected cells. Some examples of this type of cytokine are IFN-𝛼 and IL-2. Tumors often take advantage of this communication method and produce wound healing cytokines to prevent the immune cells from killing the tumor. To combat tumor growth, researchers and clinicians treat patients with proinflammatory cytokines to promote tumor killing.

Currently, two recombinant cytokines are FDA approved for the treatment of cancer, IFN-𝛼, and IL-2. Recombinant IFN-𝛼 is the first line of treatment for stage III skin cancer. It works through communicating with both the innate and adaptive immune cells to create a potent anti-tumor response. The second FDA approved recombinant cytokine is IL-2, which works specifically on 2 specific kinds of immune cells: – T cells and natural killer (NK) cells. These immune cells are primarily responsible for the direct killing of tumor cells. However, both of these recombinant cytokines have side effects. IFNs are endogenously produced in response to viral infection and are responsible for the achy, flu-like symptoms experienced during the flu. As high doses of IFN-𝛼 are used in cancer immunotherapy, patients have to endure severe flu-like side effects and patients often stop treatment due to these symptoms. Recombinant IL-2 can result in worse side effects then IFN-𝛼. In fact, high dose IL-2 is associated with capillary leak syndrome, which can lead to dangerously low blood pressure and can result in death from the treatment itself.

Recently, other potentially safer recombinant cytokines have been investigated in cancer immunotherapy that has resulted in tumor growth inhibition. Currently, some of the most promising cytokines in clinical trials are growth stimulating factors (G-CSF and GM-CSF), common 𝛾 chain cytokines (IL-7, IL-15, and IL-21), and other cytokines (IL-12).

The growth-stimulating factors cause immune proliferation and maturation. GM-CSF is the most studied of these two cytokines and is currently FDA approved to mitigate the side effects of chemotherapy or radiation therapy. This treatment has been shown to improve immune cell recovery and reduce the risk of infection in cancer patients. In addition to side effect mitigation, GM-CSF is currently being studied for direct anti-tumor effects. GM-CSF stimulates expression of different tumor recognition proteins, making the immune cells more likely to detect and eliminate cancer.

The common 𝛾 chain family of cytokines activates the adaptive immune response, as well as, NK cells. They function in a similar mechanism to IL-2, but, they have reduced toxicity and less-severe side effects. IL-15 is the most studied of this group of cytokines and, like IL-2, it induces the activation of cytolytic T cells, B cell antibody production, activation, and proliferation of NK cells. Unlike IL-2, however, IL-15 does not stimulate regulatory T cells, a subset of T cells that promote tumor growth Finally, it has a better toxicity profile then IL-2 as it does not promote capillary leak syndrome.

In conclusion, recombinant cytokines have a huge promise. Despite the fact that this was the first strategy in the field of cancer immunotherapy, we have by no means tapped out their complete potential. There is more to be learned from cytokines and their anti-tumor efficacy. Expect to see more huge strides in this field.